We went to an Indian festival this weekend and tasted some delicious food, which got me thinking about naan, and with Thanksgiving oh so close on the horizon, naan reminded me of the amazing Cashew Naan Stuffing I made last Turkey Day. Since I’m not hosting Thanksgiving this year, I decided to bring this yummy stuffing (ok, technically dressing since I’m not stuffing anything…except my face) to our dinner table a week before the big day.

I broke up 2 packages of store bought naan (which was 4 pieces, about 18 ounces total) into small pieces. Feel free to use restaurant naan too, we just don’t have an Indian place that close to us yet (one is coming soon I hear). It totaled about 8 cups. To that I added ground black pepper, some salt, and 4 sliced scallions.

In my wok I melted 2 sticks of margarine over medium heat (butter is fine too, I was just aiming for dairy-free here) and sautéed a chopped onion until lightly brown. To that I added a cup of cashews. The original recipe called for whole raw cashews–I’ll be honest I forgot to get them so I ended up picking out the cashews from a can of mixed nuts. I just reduced the salt elsewhere. I cooked the cashews until lightly browned then turned off the heat.

I added the naan mixture, plus half a cup of chopped fresh cilantro, half a cup of low-sodium chicken broth (can use vegetable broth if aiming for a vegetarian meal), and the juice of a lime to the wok and stirred it all together.

I poured the mixture into a 9×13-inch baking dish and baked, covered with aluminum foil, at 350F for 20 minutes. Then I removed the foil and baked for another 20 minutes until the top was lightly browned.

It was just as good as I had remembered from last year. Bonus–it’s kid friendly too, just avoid the cashews if serving a toddler (choking hazard). Maybe some of you will add this unique and tasty twist on stuffing to your Thanksgiving menu. If you do, please let let me know! 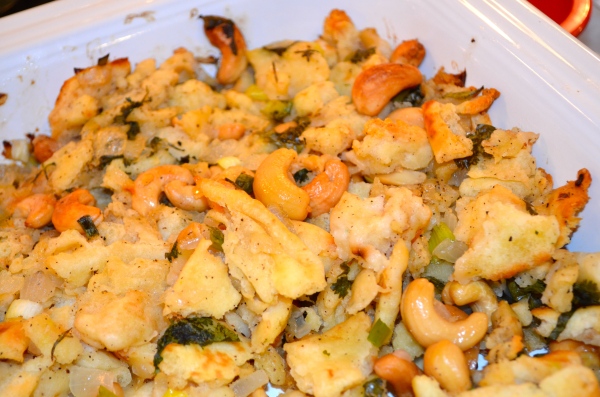 2. Break up the naan into small pieces and place into a bowl with the sliced green onions, salt, and pepper.

3. In a wok or nonstick skillet melt the margarine over medium heat then add the onion and cook until softened. Add the cashews and cook until lightly browned, stirring frequently.

4. Add the naan mixture, chicken broth, cilantro, and lime juice to the wok and stir until well combine. Transfer to a 9×13-inch baking dish and cover with aluminum foil. Bake for 20 minutes. Then remove foil and bake for another 15-20 minutes until lightly browned on top. 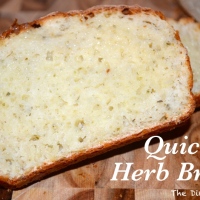 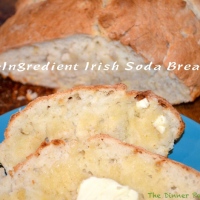